String reader is the sentry

A stately manor is nestled amidst 55 acres of green space in the Thames River Valley near Windsor, England. The neo-gothic mansion was originally built for a Belgian ambassador in 1857, but today New Lodge is a business complex whose office suites mix 19th-century elegance with 21st-century technology.

Some of that technology is utilized in the New Lodge’s security plan. Marchday Group, the property development company that manages New Lodge, understood that the location of the access gate and the reception desk had potential for problems. “The [access] gate is a couple of hundred meters (650 ft) away from the reception desk,” explains Stuart Box, Director of Cybertronix (Reading, UK), the company hired to install the security system. Naturally Marchday wanted its tenants to enjoy a safe, secure site, but the property developer also sought a smooth entry system. During an initial sales meeting, Box listened to Marchday’s concerns and proposed a license plate recognition system for the access gate. “We thought it would be quite a slick way of allowing access to the site,” he says. “[Marchday] liked the idea, and then we put the bits together.” 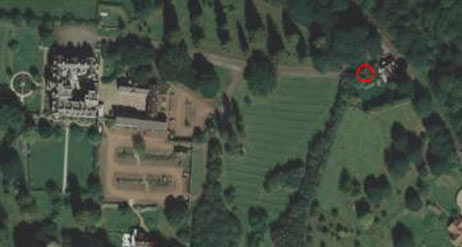 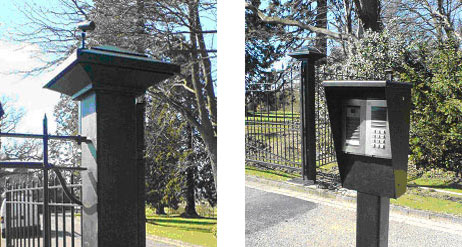 Together, those ‘bits’ comprise a fully-integrated CCTV system for both interior and exterior cameras (the vehicle recognition is only one component of New Lodge’s security network). The ANPR (automatic number plate recognition) system features an AXIS 241Q video server (with relay output for gate control) by Axis Communications, a narrow angle day/night CCTV camera, and a Dell Workstation PC running software based on the Matrox Imaging Library (MIL). “The camera we use features a narrow field of view – it’s a 12mm lens – so we can ensure the images of the plates are of a reasonable size,” says Box. ” And the ring of infra red LEDs in the lens mount is enough to get a nice reflection off the plate so you can actually see them at night.”

The Cybertronix ANPR system has been in operation since March 2006. When a car stops at the access gate, the camera acquires a picture of its plate. Software ‘reads’ the plate and compares it against the database of those ‘pre-authorized vehicles’.

The gate is equipped with an access control panel that lets drivers speak directly to the receptionist; the access panel also features a built-in camera so the receptionist can see the driver. In addition to admitting visitors onto the grounds, the main receptionist is responsible for maintaining the database of pre-authorized vehicles with a management utility software. Box adds that the system can keep track of vehicles’ entries and exits to the site. “We can time-stamp the log and keep a snapshot of the image that triggers the gate,” he says. “This way we have a record of what happens on-site.” The records could be used for evidence if necessary, but they could also be used for system development. Box says that the archived images are useful for collecting statistics of the system’s accuracy, for example, over time, weather, time of day, or lighting.

So close, yet so far

The distance between the camera and the reception desk is approximately 200 meters, twice the distance that is supported by standard analog cables. Cybertronix still opted for a wired network instead of wireless because the infrastructure already existed. “New Lodge uses fiber optics which we converted to copper 50 meters away from the gate – that’s how we get the distance,” Box says. Once the image data is transferred to the server, the Axis codec digitizes the composite signal so the data can be analyzed by MIL. A former MIL user, Box says that he had kept an eye on Matrox Imaging and “knew the String Reader module could do the hard work. It saved us from reinventing that particular wheel.”

Box likes the flexibility of IP cameras over network, and having the infrastructure in place saved time and costs. Furthermore, the video server allows distributed processing, given that the images from three separate cameras can be connected to a single CPU. The robust nature of MIL’s String Reader module helps as well in cases where a plate is partially obstructed. Since the Cybertronix system cross checks a plate against a small number of cars, a close match will open the gate; the String Reader can still function within tolerance as long as the image is not seriously corrupted.

Box sees a number of potential areas that can be served by such a system including congestion charging (a method to identify and charge cars upon entering specific zones like Central London), as well as traffic monitoring, vehicle tracking and ferry booking systems. Since the installation of the New Lodge ANPR system, Box has been busy upgrading it for moving vehicles. In recent months, Box has made progress in reading plates on vehicles traveling at speeds of up to 45 mph. “When we were looking only at stationary vehicles, we found it quite easy to get the system to work with [the MIL String Reader],” says Box. “It’s a step to go from a static vehicle to a moving vehicle. We had to be more careful about the msr (MIL string reader format) file’s contents without a database of pre-authorized vehicles, and we had to adjust the sensitivity to get accurate readings with fewer frames. But these changes were easy to make because of the [String Reader] graphical user interface. We can exclude other formats of strings such as non-UK plate formats, other formats of strings. A lot of the intelligence is actually built into the MSR file.”